Plating barrels stop rotating for all sorts of reasons – broken or worn gears, broken motors, broken chain dirves, failed electronics, barrels out of the saddle, to name a few.  Whenever one of these happens and the turning stops, it costs money or time.  This loss of rotation alarm will prevent this lost work due to rotation stoppage by giving a loud alarm and flashing LED.  Once installed there is nothing to do as its fully automatic. The only action for an operator to take is to silence the buzzer if an alarm occurs.

The Plating Barrel Rotation Alarm is activated when a barrel enters a tank by a switch mounted on the tank rim. The preferred switch for this is usually an inductive proximity sensor, but other types of switch like a lever arm switch will also work.  Once the barrel has been detected in the tank, the timer starts counting down.  After that, it then must detect that the barrel is rotating, by detecting a magnet on the barrel.  or else an alarm is given.  The magnet is mounted on the rotating cylinder, and is detected by a probe mounted within detecting range. (within 40mm distance)  The rotation of the cylinder causes the magnet to pass in front of the probe, and this registers with the electronics box and the front button on the electronics box illuminates briefly. If however, the magnet is not detected in time, an alarm sounds. The alarm even knows if the rotation stops with the magnet stuck in front of the sensor probe. In this event, and alarm is also given.

The probe that detects the magnet comes in either 12 or 16 inch lengths. To choose the best length, use the depth of the barrel axis below the tank rim.

In addition to rotation failure, the device can also monitor the time of rotation for applications where the barrel can slow down. (due to a heavy load in the barrel for example)

The rotation alarm was developed for plating barrels originally, but they are used in many different industries. Any equipment that rotates, oscillates, agitates, or conveys at reasonably low speed can be alarmed with the rotation alarm. (so motors turning at 3000 RPM would not be candidates) The only requirement is that the magnet cycle past the detecting probe. Examples of other successful applications we have equipped with rotation failure alarms are rotary drum filters, and grinding machines that activate the rotation stoppage alarm based on air pressure. (video)

Video of an installation

Barrel Rotation Alarm including one magnet, titanium mounting screw, proximity switch and bracket, probe and mounting bracket for the probe with 316SS fasteners. 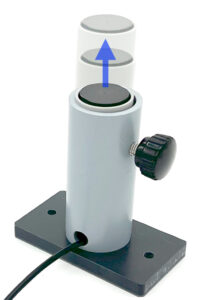