DIGITAL WATERPROOF PROCESS TIMER counts up or down and then it beeps and flashes when done.

Digital Timer counts up or down from the time you set. When the cycle is completed, a very loud warbling buzzer sounds, and bright LED flashes. Its battery powered so no wires needed. And, installation can be as easy as sticking to a metal surface with the magnet option!
Easy to program with only three buttons.

In addition its built to survive the harshest environments so its waterproof, corrosion-proof IP65 enclosure is built for plating lines, commercial kitchens, factories, and any wet or corrosive environment.

The blue buttons adjust the time up or down like a kitchen timer. When the time is set, the large green button in front starts or stops the time cycle. That’s it!

There are many different operation modes available that can be selected with DIP switches.  The default mode is a simple countdown. (or count up)  In addition, there is an early warning signal where the buzzer produces a two second beep and the one of the LEDs illuminates. This early warning can be whatever time you choose.  Also, you can choose which of the LEDs illuminates, either the front button or LED beacon.

Different operating modes that apply for this timer are:

More detail on these modes are on the “operating modes” datasheet below.

Magnetic feet allow the timer to be mounted on steel surfaces like the front of an oven. These are very strong rare-earth magnets covered in rubber for extra friction.  They will not vibrate out of position. In fact, you will probably be able to open your oven door by pulling on the timer. When this option is selected we get rid of the mounting ears unless you request otherwise.

Different buzzer tones are available to make it easy to distinguish between timers if there are a number of them in hearing range. Here is a link to the different tones.

Finally, there is a silencing muffler available if the buzzer is too loud. This drops the sound by 20dB.

Both T4 models are battery powered and are the same in every respect except as follows:

T4 – has the time-setting buttons on the outside to easily set different time cycles.

T4X – has no external time-setting buttons, time is set from the inside buttons only.  This is a good choice if it is best that the operators shouldn’t tamper with the time setting.

AC powered timers with relay output are on our T5 page 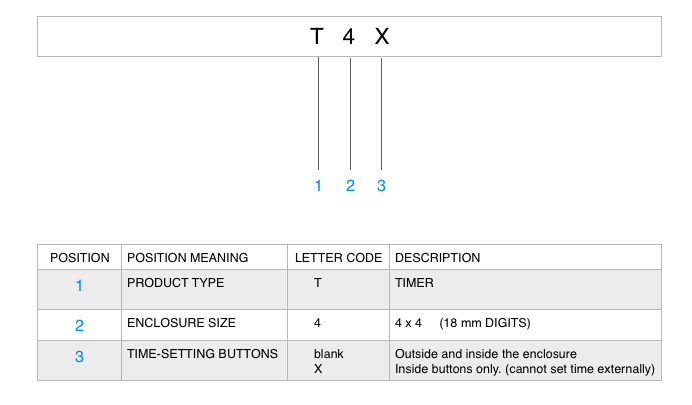 Set time with internal buttons only $265

Sometimes our buzzers are too loud.  Snap-on “muffler” reduces the volume by 20 db and anywhere in between just by rotating the slots.
[V-1]     $6

NIST traceable calibration by an

independent laboratory.  Our specification is 0.05% tolerance.  Certificate will be shipped with the timer and include actual test times for the timer being calibrated.  Certificates are also available online through our lab’s website.   lab link here
[CAL-1] $75